Trap-neuter-return is a humane, non-lethal alternative to the trap-and-kill method of controlling cat populations. Trap-neuter-return (TNR) is a management technique in which homeless, free-roaming (community) cats are humanely trapped, evaluated and sterilized by a licensed veterinarian, vaccinated against rabies, and then returned to their original habitat.

In the long term, TNR lowers the numbers of cats in the community more effectively than trap-and-kill.

Good Samaritans in neighborhoods all across the country provide food, water and shelter for community cats, and TNR provides a non-lethal, humane way to effectively manage these community cat populations. In some programs, friendly cats or young kittens are pulled from the colonies and sent to foster facilities for socialization and, eventually, placement into forever homes. Stopping the breeding and removing some cats for adoption is more effective than the traditional trap-and-kill method in lowering the numbers of cats in a community long-term. 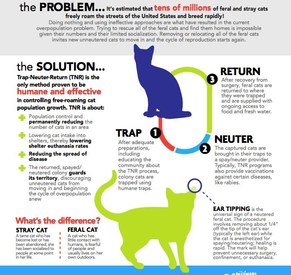 What are the other benefits of TNR?

The benefits to both cats and communities are numerous.

Equally important, TNR programs allow animal control facilities to take advantage of numerous resources typically unavailable to shelters that employ traditional trap-and-kill policies. Understandably, people are rarely inclined to volunteer for programs that fail to make them feel good about themselves. Through the implementation of TNR, volunteers know they are making a difference in the lives of the animals, and the community is benefiting from their charitable efforts. Volunteers can help trap cats and also assist animal control in locating other cats in need of TNR services. Commonly referred to as caregivers, these volunteers may also feed and monitor the health of colony cats once they are returned to their original location.

Frequent monitoring is an invaluable component of successful TNR programs because caregivers can easily identify new cats who join the colony, so that they, too, can be sterilized, vaccinated and ear-tipped. Another component of a well-managed TNR program is the collection of critical data that can be used when seeking grant funding to expand current TNR programs.

Why is TNR preferable to lethal control?

TNR is a practical solution to the failed trap-and-kill policy.

Lethal control has been used by animal control agencies for decades, but given the current problem of large populations of free-roaming cats, it is obvious that killing as a form of population control does not work. In addition, killing homeless animals as a means of population control is publicly unpalatable. By contrast, TNR puts an end to this perpetual cycle of killing and makes it possible to maintain a colony at a relatively stable number of sterilized cats unable to multiply.

Why does the trap-and-kill method fail to curtail free-roaming cat populations?

Every habitat has a carrying capacity, the maximum population size of a given species that can be sustained in a particular area. This carrying capacity is determined by the availability of food sources, water, shelter and other environmental necessities. When a portion of the sustainable population is removed (e.g., by trapping and killing them) and the availability of resources is unaltered, the remaining animals respond through increased birthing and higher survivability rates.

Because of this biological certainty, trapping and removing cats from a given area does little more than ensure that the cat population will rebound to its original level, necessitating additional trapping and killing. While lethal control may rid an area of cats temporarily, it is not an effective long-term solution because new cats will quickly fill the vacated area and breed, resulting in a perpetual cycle of killing.

Do cats pose a risk to public health?

Humans contracting a disease from a cat is quite unlikely.

According to the US Centers for Disease Control and Prevention (CDC) website, people are not likely “to get sick from touching or owning a cat.” Because free-roaming cats tend to avoid human contact, the likelihood of disease transmission is quite remote. The CDC also provides simple health tips to minimize potential exposure, such as washing hands with soap and water after touching feces or after being scratched or bitten. The agency also recommends that cats be vaccinated against rabies, which is a key component of most TNR programs.

Rabies and toxoplasmosis are two diseases often raised during discussions about free roaming cats. It’s important that both of these serious human health threats be put into proper perspective. According to the CDC website, rabies in cats is extremely rare. In fact, since 1960, only two cases of human rabies in the U.S. have been attributed to cats. And approximately 92 percent of rabid animals reported to the CDC during 2010 were wildlife. The possibility of humans contracting toxoplasmosis from cats is also quite small, as the CDC explains: “People are probably more likely to get toxoplasmosis from gardening or eating raw meat.”

How serious a threat are cats to bird populations?

Undeniably, the largest threat to birds is loss or degradation of habitat resulting from human development and agriculture. In fact, in a 2013 National Geographic article, Ken Rosenberg, director of conservation science at the Cornell Laboratory of Ornithology, says that “the top three threats to birds overall are habitat loss, habitat loss, and habitat loss.”

This perspective was shared in the same article by Gary Langham, chief scientist of the National Audubon Society, who stressed that “loss of habitat is the number one problem” as riparian habitat and wetlands continue to be removed or converted for human use. Other significant hazards to bird populations, recognized by experts worldwide, include chemical toxins and direct exploitation from hunting or capturing birds for pets.

Although no studies support the misleading claims that cats are destroying songbird populations, there’s no disputing that cats do, in fact, kill birds. The point that must be emphasized is that fewer cats mean less predation. That being the case, TNR should not be condemned because of potential threats to wildlife, but rather embraced so that free roaming populations can be curtailed as efficiently as possible to minimize potential predatory behavior.

Are there any tools to help keep community cats out of designated areas?

Non-lethal deterrents for cats are effective and readily accessible.

There are numerous cat deterrents available on the market today, several of which are discussed in this video produced by Best Friends.

What about the dangers faced by free-roaming cats?

According to a study conducted by Dr. Julie Levy at the University of Central Florida, the majority of cats (83 percent) in the 11 cat colonies studied were present on the campus for more than six years. It’s quite likely that many of the observed cats far exceeded that life span, since approximately one-half of the free-roaming cats first observed in the study were already adults, so their true ages were unknown. Furthermore, according to Dr. Levy, the body weights of these free-roaming cats, when compared with pet cats in previous studies, exhibited “no significant differences.” Neutering these cats resulted in an increase in body weight and healthy overall body condition.

Other studies reported similar findings. For instance, from 1993 to 2004, seven TNR organizations throughout the USA collected data on 103,643 free-roaming cats examined in spay/neuter clinics. Less than 1 percent of these animals needed to be euthanized because of debilitating conditions, trauma or infectious diseases. The one program that tested for FeLV and FIV reported an overall infection rate of 5.2 percent, which is similar to previous studies that reported results for both pet and feral cats.

Why are feeding bans ineffective?

Feeding bans are notoriously ineffective primarily because they are impossible to enforce. Also, human nature rarely allows someone to sit idly by while an animal suffers. When a hungry animal appears, compassion prevails. Consequently, people will not adhere to an ordinance discouraging the feeding of animals in need.

Hungry cats can continue to reproduce, which further undermines the intent of most feeding prohibitions. Equally important, feeding bans jeopardize the ongoing sterilization and vaccination services provided by caregivers who diligently maintain and monitor cat colonies in the community. It is also important to note that once feeding by humans is prohibited, hungry cats are forced to compete with wildlife over available, natural food sources.

Does TNR encourage the abandonment of cats?

Cats will be abandoned with or without TNR.

In fact, cats have been abandoned for as long as people have had pet cats, which is why TNR is necessary today. These periodic abandonments, however, will not derail the overall success of a TNR program because cat colonies can absorb the occasional newcomer yet still show a significant population reduction when the majority of the animals are sterilized. Indeed, the monitoring that is an integral part of most TNR programs ensures that new arrivals are sterilized, vaccinated and, when appropriate, adopted into loving homes.

In addition, maintaining a local TNR colony is likely not the determining factor behind whether someone abandons a pet or not. Surely there are a variety of other issues that factor into this irresponsible behavior. However, efforts should be made to place feeding stations in out-of-the-way locations to minimize the likelihood of desperate people illegally abandoning their pet cats. Other strategies should also be employed to further reduce potential abandonment, such as posting signs about abandonment ordinances at high-profile cat colonies.

What provisions of a local ordinance are most harmful to community cats and TNR caregivers?

Legal protection is needed for both free-roaming cats and the individuals who provide this invaluable community service.

Many towns, dissatisfied with the inefficiency of trap-and-kill programs, are turning to TNR as a humane alternative for dealing with free-roaming cat populations. Unfortunately, current laws often conflict with this well-intentioned plan. For instance, broad definitions of “owner” may include anyone who feeds an animal for even a short period of time, inadvertently targeting community cat caregivers. If legally construed as an “owner,” a caregiver who manages a large colony may find himself or herself in violation of restrictive pet limits and cost-prohibitive cat licensing requirements. Of equal concern, caregivers who are deemed owners may be in violation of running-at-large provisions, despite the fact that the cats were at-large when the caregiver first began caring for them.

Poorly crafted ordinances may create other legal obstacles to caregivers who actively participate in TNR programs. This is especially true in communities where animal control interprets the return of a sterilized cat to his/her original place of capture as “abandonment.” To alleviate the negative legal consequences, towns that implement progressive TNR programs should revise current ordinances so that community cats, and the generous caregivers who support these homeless animals, are exempted from these burdensome provisions.

Some provisions included in an ordinance intended to protect the overall well-being of cats may also be problematic and inadvertently lead to the death of healthy animals. For instance, language that requires testing for feline immunodeficiency virus (FIV) is a serious concern in situations in which any positive result mandates that the animal be killed. These types of policies are horribly misguided, because not only is it possible for FIV-positive cats to live long, happy and healthy lives, but cats who have been vaccinated for FIV will likely test positive and ultimately face a death sentence despite the fact that the animal may be perfectly healthy and incapable of contracting that disease. It’s also important to note that testing of any kind comes with a margin of error and false positives are not unusual.

What happens if you trap an owned pet cat?

All free-roaming cats should be treated equally.

The success of any community cat program is contingent on sterilizing the majority, if not all, free-roaming cats in the vicinity.